Baseball translations from English to Spanish. Not your plain Spanish, Dominican Spanish. A baseball game is more fun if you can understand what is being said.

Learn a little bit of Spanish so you can fit in when you go to your next game in Dominican Republic (or if you sit next to some Dominicanos at a game in the USA). You can impress them a little with your knowledge of Spanglish. It is funny to note that many of the words are the same in English and just pronounced with a Spanish accent. Lets Ple Bol!

For a complete listing of Spanish to English and English to Spanish baseball terms in PDF form.

To learn how to use more Dominicanismos check out the language section.

In Dominican Republic when you see dominoes being played it is not the simple game you played when you were a child. Dominions are the National Pastime and are as much a part of the Dominican culture as is La Bandera (the typical mid-day meal consisting of beans, rice stewed meat and a salad), Baseball and Merengue. For most, it is just part of everyday life. This game flows through their blood.

Dominoes are a game most have played as children in its most simple form. I’m sure most people have a box of dominoes somewhere in their childhood history. Dominoes are a game that anyone can learn to play in a few minutes. Easy enough for children and yet has enough strategy that adults enjoy it equally.

Throughout the Dominican Republic one can hear the familiar sound of dominoes. Be it the crisp clicking sound as the pieces are being mixed on the table or the sound of a piece being slammed onto the game board. On almost every corner a game can be seen being played passionately and with intent by Dominicans who take pride in playing a good game. Many games are played for money or drinks and this is VERY serious playing.

Even though the game is easy to learn, there is much more to it than what one sees at first look. The best domino players know what you hold before you play your next move. They know what “bones” or “fichas” have been played and what still remains in the hand. It is amazing to watch these players sit for hours, most with a plastic glass of either beer or rum sitting at their side or in the small cutout holes on each corner of the domino table. There might be a can of Clamato juice to add to the beer. They sit for hours and hours, intent, not noticing the hour. Not noticing much of anything but the game and the social aspects of playing a good game of Dominoes.

The way Dominicans play dominoes is not played by the legal rules according to the Domino Pros worldwide. Dominos Dominican style is a little more shrewd and requires some skill and fast thinking. First, for a good player, they usually have their Frente or their favorite partner. They know each others style and moves and even hand and facial signals. The language of the body is a big part of their game. This, it seems, is the reason Dominican domino players make so much noise. So they can cover their signals with distractions, noise and useless banter.

Playing the game “Dominican style” takes a little relearning of what you were taught. Dominicans have a few little deviations from the rules and made the game their own. Make sure you know which style you are going to play if you attempt to play in the street. There are extra points for different moves. The team in the lead does not give up position; hence the starter is not rotated. The shrewdest controls the game and makes it hard for the underdog to gain the lead. Just be aware of the differences and all will be fun.

I finally figured out how they play for money. If you watch a game where the money is passed around it can look very confusing. One player will pass whatever is the given amount of cash, let’s say $5 pesos. Then you’ll see that player that just got $5 passing it back to another player. I finally figured it out that when someone cannot play their turn they have to pass money to the player that laid that tile. And so it goes. If the next guy can’t move he passes money also. Sometimes when the big boys play they will agree on larger amounts of money to be passed, maybe even $100 pesos.

If you want to try out your hand at a game of Dominican-style Dominoes. First, walk over to a game being played and watch. Then when you get an opening, ask if you can play. Maybe buy a jumbo Presidente beer or a bottle of rum then ask if you can play. A little bribery can never hurt. Or, if you see an empty table ask if you can set it up and pull up a few chairs. Buy a drink, spread around the plastic cups, maybe a can of clamato. They will come.

This is a funny video of a race at the Autodromo Race Track in Santo Domingo. The winners of the Donut Competition/ Competencia de Ceritos. Just to show how important dominoes are here in Dominican Republic. After the racers did all their donuts (this is what the competition was, who could do the best donuts on the track). These winners of the race did a funny and pulled a Domino table out of the trunk and set it up on the track. Dominoes! The most important sport of the pais!

Some Domino Facts and Trivia

*Domino words – Fichas – the name of the domino tiles; Repiter – repeat – when a player can keep adding tiles of the same suits; Mata – (literally kill) when a player blocks attempts by an opponent to and helps out his partner; Tranqua – to lock – player plays the last ficha in a suit and no other player can play.

*Some of the presidents of the Dominican Republic have sets of dominoes with their faces printed on them. Wonder where we can get a set of those Dominos!?

*The name ‘domino’ is thought to come from the French word for a Christian priest’s winter hood, which was black on the outside and white on the inside. ‘Domino’ is also a style of mask featuring a black and white motif.

*Domino tiles are usually twice as long as they are wide and usually made to be exactly half as thick as they are wide so they can stand on edge without falling over. A domino tile can be of any size, but is typically about 1 inch wide and 2 inches long.

*Six Dots – Since returning to the states, I have learned some other games that can be played with dominoes besides Dominican-style, but my first domino game remains my passion. To play Dominican style Dominoes one must have a traditional set of Dominoes that only has up to 6 dots.

*Pins – The “pins” are the little metal dot in the center of the Domino that keeps it a smidgen lifted off the table. It makes it much easier to spin and mix the dominoes. Also, I think the pin makes a louder sound when the Domino is smashed onto the table. One can spin the Domino when they are about to win the game, it’s a subtle way to say “I’m cool but neener neener neener! I’m gonna win!”

*The game of Dominos in the past seemed to be played by the older people, los viejitos. Now it seems that the younger generation has come to love the game. Even though it is still mostly a Latino game it has come to be loved by many ages and ethnic groups more and more. People have discovered that it is not only a childhood game.

*There are many domino tournaments throughout the world where there is big money involved. The official tournament season starts in February with the big final tournament played in August. A tournament held August 25 and 26, 2006 in Las Vegas, Nevada, USA. presented a total cash award for 1st place at US$50,000.

*ESPN Deportes, the Spanish version of ESPN, started covering the World Domino Tournaments. It became so popular that they now have the tournaments on ESPN2. They cover both the singles and doubles games. It seems that the games passion, trash-talking, and table-smacking that is a crowd drawer on the streets is also what draws people to watch the game on TV. The game has suspense, energy and strategy. It is turning into “the next big spectators’ sport”.

*Maybe in time there will be a TV show like the Celebrity Poker shows on Television. Celebrity Dominos..you heard it here first….. 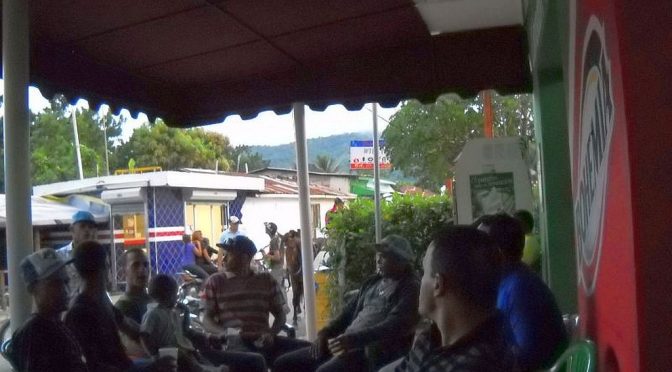 Pastimes – Things To Do

There are so many traditional Dominican pastimes and things to do. I will try and list a few of the more traditional things that the Dominican people most enjoy doing to pass the time away.

Baseball is our most beloved team sport. Dominoes are played on a street corner or in a park. We have state of the art movie theaters.

One of the Dominican peoples most favorite pastimes I would have to say is taking it easy. Being with friends and family. Sitting outside in the park or on the porch visiting and talking. Sharing a cold beer at the local Colmado with the neighbors.

There are so many different typical Dominican things to do. Make sure to try out a few.