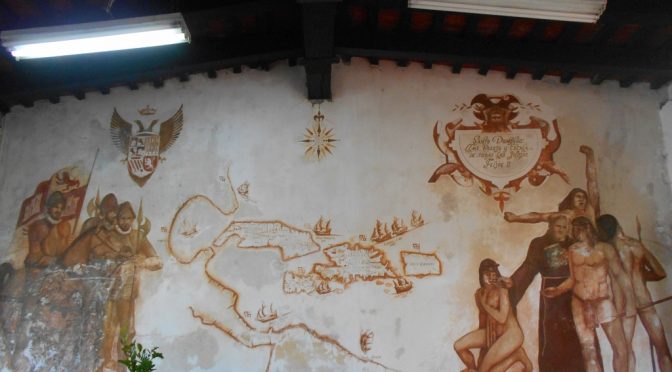 Title page: A VOYAGE TO NORTH AMERICA, AND THE WEST INDIES, IN 1817. BY E. MONTULE. KNIGHT OF THE ROYAL ORDER OF THE LEGION OF HONOUR. AUTHOR OF TRAVELS IN EGYPT, &C. Library of Congress 1867 City of Washington PRINTED FOR SIR RICHARD PHILLIPS AND Co.BRIDE COURT, BRIDGE STREET 1821

Note from Janette – Colonial Zone I will include excerpts of the document that pertains to Dominican Republic or things that I feel are of interest to my web site viewers and bold the things I really enjoy (to read the entire 102 page document click the link above). The voyage seems to start and end in New York. Starting on November 8, 1816 and ending on October 5, 1817. In his description of New York he seemed to really like the city according to what I read. It is interesting to note that he said one did not need a passport or documentation to enter the city.

The highlights of the document are where Édouard de Montulé writes about what he sees in his first visit to the Island. Included is a description of a cock fight, the way women look and behave, about the “lazy inhabitants” (maybe they are this way because of the heat). He describes the wooded areas, the birds he does not recognize, mosquitoes, a cave, mountains and rivers, different palm trees and fruits (bananas, coconuts, pineapple and more..). He describes how a house looked and how several “negros” were singing songs of the Congo and pounding a poisonous root to make cakes they serve as bread (casabe). He wrote about the tower where Columbus lived and how it was the “first European edifice erected on American soil.” Also about running into pirates when leaving the island.

The beginning of the Dominican Republic information starts on Page 19 – From St. Domingo, the 15th February 1817.
LETTER V.

Here are some of my favorite excerpts:

(page 20) The town of Santo Domingo is large, and built of stone, and the streets are, generally speaking, in direct lines; the cathedral might pass for a noble edifice in any country; in it is preserved the anchor of Columbus’s ship, together with his portrait, whose resemblance to that of the great man who has so recently filled the universe with his name, must appear striking to every observer. The place is surrounded by a pretty good fortification; some hills command it on one side, and it has recently been strengthened by a trench.
——–
Santo Domingo, the 26th February 1817. LETTER VI.

Santo Domingo is regularly enough built, and, generally speaking, handsome; the national or citizen guard performs duty well, but the colony is in so declining a state that it is painful to witness. The governor of Western Spain formerly resided at Santo Domingo, but that vice-royalty has long been removed to Vera Cruz.
—–
The Spaniard’s great delight consists in passing the day in idleness, his principal labor being reduced to drinking, eating, sleeping, and frequenting the churches, which are numerous: all this, however, does not prevent the two sexes from abandoning themselves to those passions which a burning climate creates and maintains. Every one on rising, at about five o’clock, takes a cup of black coffee, this being a general custom in the colonies; after which they repair to the public promenade. The ladies, habited in black, whereon the whiteness of the linen and lace contrasts agreeably, are at that hour usually unaccompanied; it is not however uncommon to see them accosted, or even escorted by priests; they are in general good looking, but precisely in the costume of Bazil, in the Marriage of Figaro. After this walk, and paying some visits to churches, they return home, there to remain till sun-set. At the moment when the oratio, or angelus bell rings, (no matter how distant from the pealing sound) you are bound to stop short; at least you must take off your hat, and fall upon your knees; this is a pious act which admits of no exception. In a more populous Spanish city, the sudden stoppage of an whole moving multitude, must appear very extraordinary; since it so forcibly struck me in the depopulated streets of Santo Domingo.

The women are not, strictly speaking, handsome, they are small, but well made; and their complexion, somewhat brown, is not unbecoming, but the sparkling vivacity of their eyes, and their whole physiognomy, conveys an expression of their internal thoughts and feelings.

Some time after my excursion to Nissas, passing along Commerce Street, one of the finest of the town, I saw a great crowd at the door of a house, and was informed by M. La Coste, the French physician, that the persons so assembled were waiting to witness the cock fights; that I might enter if I thought fit, that he himself often resorted there, and was fortunate in betting.

Accordingly I went in, having never witnessed a similar spectacle, of which the Spaniards here are very great amateurs. This cruel sport takes place in a species of theatre, the roof and columns of which are not unlike the covering and pillars of a cottage decorating a garden in the English style. The stairs conducting to the first tier!–You are doubtless astonished!! but really there are first places–formed like a ladder, which would well become a hen-house; be this as it may, persons of the highest ton honour this place with their presence, and bet for the black or white cock, from one, two, or three hundred piasters, up (page24) to two thousand francs, or eighty pound. The cocks have no steel spurs as in England, but nature has armed them with double spurs, at least compared with those of France, and care is taken to render them very sharp. These birds come from the island of Porto Rico, and are sold at very high prices, according to their strength and courage.

When the two cocks equally fatigued retire to the extreme verge of the arena, their respective masters excite them; each taking his bird, puts its bleeding head into his mouth, as if intending to devour it, at the same time passing his hand under the tail, he rubs it with an aspect so truly serious and comic, that I believe no physiognomy save that of a Spaniard could support the expression. The combat then recommences, and terminates only with the death of one of the champions. The day I was present, two cocks not fighting well, their masters seized them spontaneously, and killed them by dashing them vehemently to the ground. Not being tempted to bet, I retired, reflecting on the instantaneous fury with which those birds are seized; which led me to make some comparisons not very honourable to humanity; these, however, I shall keep to myself.
—–
We passed by an habitation, where several negroes, singing songs of Congo, were pounding the root of the manioc, from which they make cakes that serve for bread. They worked with unparalleled ardor, and did not seem to perceive the sweat which channelled down their ebony limbs. This root if not undried would be a poison; but as it could not then be scraped, the use of it is not so dangerous as might be imagined.
——
The island of St. Domingo, and particularly that part in possession of the Spaniards, has gold mines, which are no longer worked; it is even stated that they are lost: they might, however, easily be found, since upon the banks of some rivers negroes are occupied in collecting the gold-dust. (page 29) The centre of the island being occupied by mountains, which in all directions descend to the sea, in hills, or verdant plots, called Mornes, it may be conceived that there are many rivers. The Ozama, upon the right bank of which St. Domingo is situated, is large and deep; the whole island is naturally divided into three parts, by the mountains; a circumstance which greatly tends to diminish any apprehensions from the Negroes and the Mulattos.