Some of the Nocturnal Creatures of the Dominican Republic.

Creatures of the night that are usually only seen after dark.

This furry small mammal creature looks like a mix between a large guinea pig and a small groundhog, with some rat-like looks thrown in for good measure. They are only found on the islands of the Caribbean where they are, for the most part, the last indigenous living land mammal. Their walk is more or a waddle. When they are frightened this slow waddle can change into a fast high hop. Using this hop or their good climbing skills is how they escape their predators. The Hutia have an almost naked tail that is a little scaly. They do have claws. Mainly vegetarian, they live on roots and fruits which they eat when they come out of their burrows, hollow trees, or nesting boxes where they live, after dark. The small creature closely resembles the rabbit having the same nesting and eating habits.

The Hutia is becoming increasingly rare. They have been hunted and have not been able to repopulate as fast as they are being taken. Also with their habitat slowly diminishing they are slowly disappearing from existence. These cute fuzzy creatures have been hunted since the Taino days. Their meat was considered quite tasty by the indigenous peoples and also by Columbus and his European gang. The Hutai does well in captivity and hopefully, soon the Dominican people will start raising/farming them as a food crop. Let’s hope that we humans can protect these little furry island mammals and once again see the Hispaniolan Hutia romping and bouncing freely through the Dominican landscape.

Interesting BBC video produced as a visual anthropology experience, and part of the project The Last Survivors “Saving the Hutia and the Solenodon”.

This furry rabbit sized creature is from the genus Dasyprocta and can be found throughout the American tropics. The species found in Dominican Republic and Haiti is the Solenodon paradoxus.

This insect-eating mammal is quite similar to a mole as it feeds and moves around mostly in the darkness and at night. It has a long body, with a small or sometimes non-existent tail, and small ears. This burrowing animal weighs about 25 to 35 ounces at adulthood. Its long narrow feet have some very sharp claws. The teeth of this wiry, dark brown mammal are its most unique part. The teeth can inject venom into whatever it bites. This venom is injected through some small grooves that run down their small sharp teeth. They are the only mammals with this ability.

The Agouta is an ancient creature that survived the end of the dinosaur age. It also was one of the very few mammals that were able to live through the colonization of the islands. At one time they were about the only predators on the island. This indigenous creatures reproduction cycle is very slow. They are only able to get pregnant 1 or 2 times a year, making only a few babies in their litter each time. They are born in burrows and can remain with their mothers for several months, which is quite a long time as compared to other insect-eating creatures.

The Hispaniola or Haitian Solenodons’ numbers are dwindling rapidly. The colonizers of this island and the non-indigenous predators that include dogs and cats found this small insectivore to be quite tasty. Now with the massive deforestation happening here, especially in the east part of the island, the solenodons numbers are rapidly dwindling. This along with their inability to reproduce rapidly has made this species almost extinct placing it at #6 on the endangered species list (3/08).

Pictures taken in the town of Barahona, Dominican Republic. They caught the solenodon and released it later. They said it had a very bad smell and was very mean and aggressive.

*As of April , 2008 the Dominican Zoo, Parque Zoológico Nacional Arq. Manuel Valverde Podestá República Dominicana in Santo Domingo has their first solenodon to show to the public. It was found in the El Sibao region of República Dominicana. This is one of the few in the world on display as it is so rare.

More about the Hispaniolan solenodon
The EDGE of Existence program aims to conserve the world’s most Evolutionarily Distinct and Globally Endangered (EDGE) species by implementing the research and conservation actions needed to secure their future. Check their web site to see what you can do to help. There is also more information on many endangered species of wonderful creatures of the world.

The Dominican Republic does have its share of spiders, scorpions, ticks, mites, centipedes and other nasty, ugly yet amazing creatures. They are not readily seen, especially in the cities, but in the country they can be plentiful. They are nocturnal and are rarely seen in the daylight.

I never really worried about them. They are not very aggressive. They can be frightening and they do like to crawl into houses at night. This can be a bit startling waking and seeing one of these creatures sitting on your pillow beside your head or rolling over on one in your sleep. The cacatas I saw were more anorexic than this picture but I was told by a friend that he saw one that was so huge, it was the size of a kitten, running around in a warehouse. I try and remember to check the inside of my shoes before putting them on when I am in the country.

When attacking a Cacata beware, they are crafty creatures. They jump and can play dead. When they do walk on your flesh they seem to almost stick to it. Many Dominicans that I have met think that if they do get bit by one of these hairy spiders they will surely die.

Read more about these arachnids at, Invertebrates III: Introduction to Arthropods; Arachnids. It has much information and creepy pictures of these creatures that nightmares are made of.

Continue learning about The Creatures of Dominican Republic – Page 2 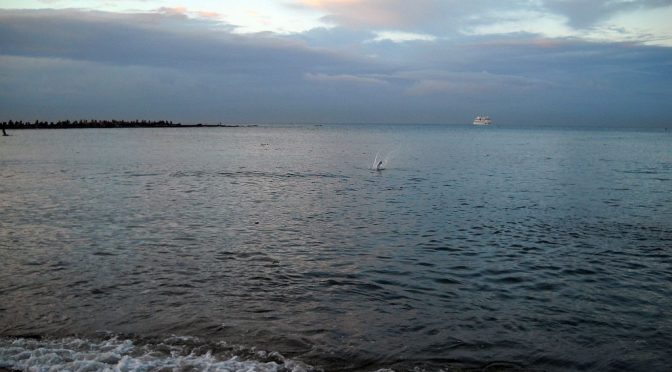 The Creatures of Dominican Republic

On the island of Hispaniola in the country of Dominican Republic we do have some wildlife to speak of. I’m not referring to the human-type of wild life, although this is here in abundance. The creatures, big and small are what I’m speaking of. The endangered, extinct and the creatures that are unique and thrive on this tropical island.

Here we have no large predatory animals to speak of. Nothing that is going to eat you alive, except for the mosquitoes (which I think should be considered as being the new national bird), and the no-seeums, that I have no idea what they look like but they leave their itchy red mark on the flesh. There are no really dangerous creatures on our island, other than maybe a rare crocodile, cayman, a scorpion, or a spider. Most tourists and people living in the cities never come across these things. Even the Dominican tarantula known as the Cacata is not an easy crawly to see. They usually don’t live in the cities and they usually only come out at night. Most of the cacatas/ tarantulas I have seen were thin anorexic spindly looking arachnids. I know people that have seen giant car-covering spiders carrying a cat away in its dripping fangs, lol. Really there are some very large spiders here but not quite that big.

Under The Dominican Sea

Dominican Republic has no creatures that will kill you

Here we have no large animals to speak of. Nothing that is going to eat you alive, except for the mosquitoes (which I think should be considered as being the new national bird), and the no-seeums, that I have no idea what they look like but they leave their itchy red mark on the flesh. There are no really dangerous creatures on our island, other than maybe a rare crock, cayman, a scorpion, or a spider. Most tourists and people living in the cities never come across these things. Even the Dominican tarantula, known as the Cacata, is not an easy crawly to see. They usually don’t live in the cities and they usually only come out at night. Most of the cacatas/ tarantulas I have seen were thin anorexic spindly looking arachnids. I know people that have seen giant car-covering spiders carrying a cat away in its dripping fangs, lol. Really there are some very large spiders here but not quite that big.

The island seems to be inhabited mostly by birds, of all types and colors and lizards, of many sizes and shapes. There are the basic domestic animals not native to the island. There are many cows, goats, chickens and horses. You may even encounter a rabbit that escaped from captivity and made its home in the countryside. There used to be wild boars but they are almost gone and have only been spotted in the mountains where there is little human population.