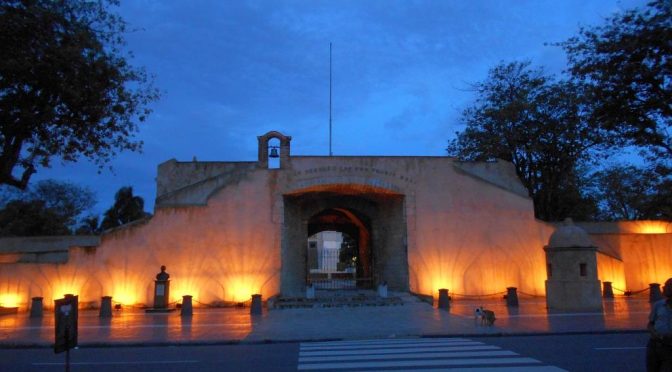 Parque Independencia is a must-visit when you are exploring the oldest city in the Americas, especially if you are interested in the history of the Dominican people and their fight for freedom. The park houses the Altar de la Patria. Home of the mausoleum for the founding fathers of the Dominican Republic, Francisco del Rosario Sánchez, Juan Pablo Duarte and Ramón Matías Mella.

Bastión de San Genaro(¹), the original name of this part of the wall, was built in 1543. It is typical of the 17th century built Italian style. Its purpose was to defend the city from a sneak attack by land along with its connecting Fuerte la Concepcion. The wall that this gate is built into ran all the way down to the sea and included the Puerta de la Misericordia. You can also see what remains of the protection moat that surrounded the walled city of Santo Domingo.

(¹)Bastion or bulwark – A projecting part of a fortification built at an angle to the line of a wall, so as to allow defensive fire in several directions. If you look at the map of Santo Domingo you can see the triangle-shaped bastion.

Independence Park / Parque Independencia was converted to a park in 1912 when Architect Antonin Nechodoma did a redesign. This design later made way for the Altar de la Patria. The road that ran through the center of the park was closed and benches added.

The gate Puerta del Conde is named after El Conde de Peñalve / Count of Peñalva, Bernardo de Meneses y Bracamonte. He was the Captain General of the walled city of Santo Domingo. He saved the city, along with his men, from the British invaders during the Siege of Santo Domingo. Admiral William Penn and General Robert Venables led this battle. The Count ordered the wall to be modified and this work was completed in 1655.

On February 27, 1844 Puerta del Conde became the national symbol of Dominican patriotism when Francisco del Rosario Sanchez raised the first Dominican flag. It was here that the heroes of the country overtook the Haitian government and retook the city for their own thus reclaiming their Independence.

Above this gate at the beginning of the Conde Street reads the Latin inscription “ìDulce et Decori est pro patria moriî” translated “It is indeed sweet and honorable to die for the fatherland.”

On February 27, 1933 Rafael Leonidas Trujillo ordered the name of the gate be changed. He changed the official name to the Door of February 27 / Puerta de 27 de Febrero. The Dominican people still call this symbol or patriotism Puerta el Conde. This gate symbolizes the ideals of freedom of the Dominican Republic.

In 1943 Trujillo ordered the remains of the three founding fathers of the Dominican Republic to be moved from the Chapel of the Immortals / Capilla de los Immortales in the Catedral of Santo Domingo. Juan Pablo Duarte, Francisco del Rosario Sanchez and Ramon Matias Mella had a new resting place.

Today the walls surrounding Independence Park serve as a place for temporary exhibitions placed by the Ministry of Culture. There are always interesting exhibits that display a variety of literary, artistic and historical events.

The guarded gate Door of the Count / Puerta del Conde or Door of February 27 / Puerta de 27 de Febrero is the entrance to the old walled city of Santo Domingo now known as Colonial Zone / Zona Colonial.

Above the gate is a catwalk that was used for guards to keep their watchful eyes open around the entrance to the city.

As you enter the gate, flanked by uniformed guards called the Guardia Nacional, you will really be leaving the original walled city of Santo Domingo. You are now outside the original protection that existed in the colonial days.

As with many of these important military installations they used moats for protection. Here you can see a triangular shaped moat / foso running towards what is now San Carlos. These fosos were used to protect the west along with several guard booths / garitas. Now, there are stairs where you can descend into the moat and shaded tunnels that were once filled with water that are below the park’s walkways.

After walking through the Puerta del Conde / Gate of the Count you will see the Alley of Heroes. The interior Plaza at Parque Independencia was remodeled and opened to the public on February 27, 2017 on Independence Day.

The Alley of Heros has the busts of 34 national heroes lining either side of the plaza. The busts are made of reinforced fiberglass with a bronze patina. They are 90 centimeters high sitting atop a pyramid shaped base that is covered in coral stone.

Also included in the Plaza are 2 pyramid-shaped pillars. These pillars describe the plaza and the history of the country’s independence and restoration. A plaque honors the heroism of General Luperon during the war of restoration in 1865.

Closest to the wall is a bust of Pedro Alejandrino Piña. He was a writer and one of the nine members who formed The Trinitarian / La Trinitaria for the patriotism who fought for the freedom of the Dominican people. When the group began public protests against Haitian rule in 1843, he was exiled to Curacao with Duarte and Pérez. He returned with Duarte in 1844 when Independence was achieved, but both were again sent to exile in Venezuela the following year when Santana took power. He returned to the DR again to fight the French attempted takeover, the restoration war against the Spanish and the attempted annexation by the USA. He was an influential politician until his death.

There is also a statue of a beautiful woman looking so calm and gentle and a little forlorn. Holding this distinguished position is Dona Manuela Díez de Duarte, the mother of the Founding Father Juan Pablo Duarte.

Manuela was born in Santa Cruz del Seybo June 27, 1786. She married Juan Jose Duarte in 1800 probably in Mayaguez, Puerto Rico. They had eight children: Vicente Celestino, Juan Pablo, Filomena, Rosa, María Francisca, Manuel, Ana María y Sandalia. She occupies a distinguished position in the select group of Women of the Independence. Manuela offered her home to be used for secret meetings of the Trinitaria. She even sold some of her property to purchase weapons for the fight for independence. She died in Caracas, Venezuela on December 31, 1858.

If you walk straight ahead you will see the Altar of the Patriots with its glowing shield atop the tall entrance. It is surrounded by water making it a small island at the back of the park. There are 4 walkway bridges leading to the centrally located marble monument.

Be sure to pay attention as to not trip over the raised bronze sculpture in the center of the walkway. This is a 32 point star compass. It is told that from this compass is measured all points of the country. Here marks kilometer 0 / kilómetro cero.

In 1943 Trujillo ordered the remains of the three founding fathers of the Dominican Republic be moved from the Chapel of the Immortals / Capilla de los Immortales in the Catedral of Santo Domingo. Juan Pablo Duarte, Francisco del Rosario Sánchez and Ramon Matias Mella had a new resting place.

The existing Altar de la Patria was designed by architect Cristian Martinez Villanueva and built in 1976 when the park was restored. The new monument made of white marble looms in the center of the park with the bright shining National Shield / Escudo Nacional above its door. This beautiful building is a fitting memorial for the heroes and Founding Fathers of the Dominican Republic.

This unique building is surrounded by water making it a small island at the back of the park. There are 4 walkway bridges leading to the centrally located marble monument.

Within this marble structure Juan Pablo Duarte, Francisco del Rosario Sanchez, and Ramon Matias Mella bodies are interred. A solid marble slab covers each of the 3 founding fathers’ tombs. The large mesmerizing statues of these patriots, carved by Italian sculptor Nicholas Arrighini, stand proud at the head of their tombs.

In the center of the marble shrine burns the eternal flame that is kept lit in memory of the patriots. There are usually flowers and wreaths lovingly placed around the statues to honor the national heroes. The mausoleum is open from 8:30 to 6 daily.

Outside of the park on the left side is a small fenced off area called Plaza Patriótica a los Caídos de la Revolución de Abril de 1965. Un homenaje del pueblo dominicano a los Héroes y Mártires de la guerra patria De 1965 / Fallen Patriot Square of the Revolution April 1965. A tribute to the Dominican people and the heroes and martyrs of the Patriotic War of 1965.

Note – You do not need a guide to take you through the park so do not be fooled. If you want a guide they are available at the park. Do make sure you agree on a price beforehand.