The Puerta de la Misericordia, originally named Puerta de Santiago and Puerta Grande, was the first fortified gate of the city of Santo Domingo. The lone wall was once part of the original wall that ran along the edge of the First city in the Americas, from Puerta del Conde (Parque Independencia) to Fuerte San Gil at the edge of the sea.

The door was designed by the architect Rodrigo de Liendo and constructed in 1543; the bulwarks were added in 1568. In the colonial period, the gate served as access to the great plains of the south. The wall was connected to and protected by the military of the Fuerte de San Gil which is located just a few hundred feet south at the shore of the Caribbean.

The gate received its current name, Puerta Misericordia (Gate of Mercy), in 1842. At this time the survivors of the many earthquakes and storms that occurred on the island gathered here to place the Blessed Sacrament thanking God for his mercy.

The Puerta de la Misericordia is the place that Ramón Matías Mella fired his legendary blunderbuss (a muzzle-loading firearm) of February 27, 1844, to announce the independence of the Dominican Republic from Haiti after taking back the Fortaleza Ozama. At the same time of this shot, Francisco del Rosario Sanchez hoisted the Dominican flag in the Fortaleza.

*Near the door is a courtyard that held a scaffold used to execute those who were condemned to death. At one time there was a small chapel located in the courtyard.

*During the archaeological excavations in 1980, two small fortines (semicircular forts) that once flanked the walls were discovered.

*Located in the small plaza is a statue of Ramón Matías Mella, one of the Founding Fathers of the country.

The area surrounding the gate is now a nice little place to visit. You can sit and enjoy the view of the Fort San Gil and the Caribbean Sea located across the Malecon. There is also a Colmado across the street where you can get a little refreshment after walking around the Colonial City. You can notice that there is a catwalk over the top of the wall but it is blocked. Some of the original wall has been cut to make room for the street to pass making accessing the walk difficult.

From The Calle el Conde at Parque Independencia walk towards the sea on Calle Palo Hincado the street that separates Ciudad Colonial from Ciudad Nueva. Calle Arzobispo Portes stops at the door.

Located in front of Puerta Misericordia was a bust statue Ramón Matías Mella, one of the Founding Fathers of the Republica Dominicana. It was replaced with a full body statue honoring the anniversary of Mellas birth.

(English translation)
In homage to the Father of the Nation,
General Matías Ramón Mella
Hero of Independence and the
Restoration of the Dominican Republic,
considered the greatest genius and
Dominican military strategist
of all times.
Liberal politician. Eternal independence.

The bust of Sanchez that was replaced by the statue read: 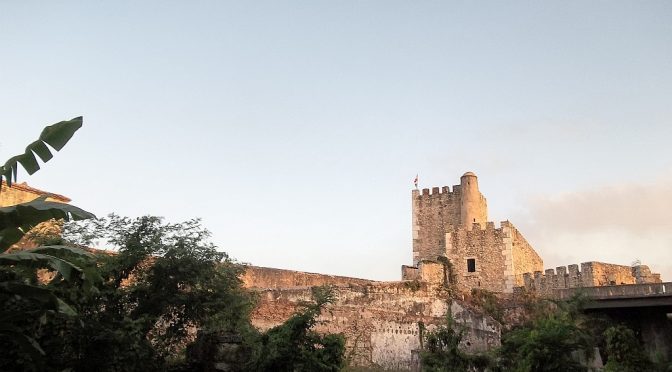 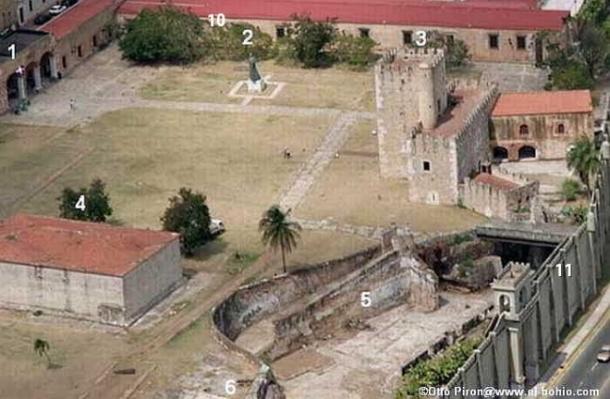