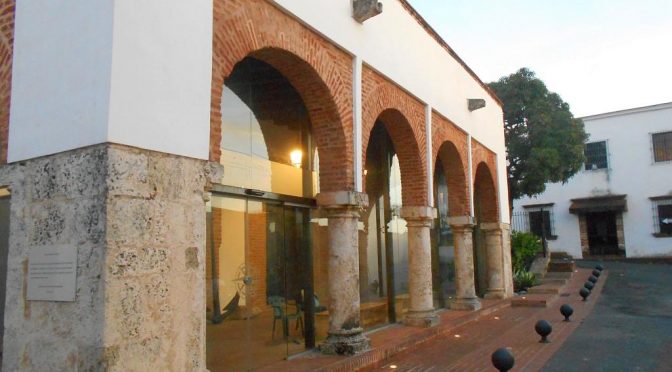 The Museo de Atarazanas is a unique Museum of the Sea. This amazing museum in the Colonial City gives visitors an insight into how it really was for those brave and daring sailors that crossed the Atlantic Ocean in search of wealth and adventure.

The building originally was part of the warehouses / atarazanas of the Spanish Crown / Corona Española. Here the goods entering the island were received and stored in this and the surrounding buildings. This area was the center of the mercantile activities of the island.

Construction of the building 16th Century colonial building started around 1509. It was built in different stages. The Gothic-style building with its stone columns, Romanesque barrel vaults, and clay brick walls was thought to have been completed in 1544.

The Museo de las Reales Atarazanas tells the story of Spanish galleons, captains and their crew. You can see how these courageous men lived and died on those Spanish galleons and ships that for centuries sailed the seas of the world.

The start of the shipwrecks first recorded was on December 25, 1492, when Admiral Christopher Columbus turned over control of the ship Santa María to his cabin boy to sleep and the ship ran aground soon after.

The Museo de Atarazanas includes historical information of many hundreds of shipwrecks that occurred along the coast of Hispaniola. The island was a strategic center for exploration during the15th and 19th centuries. But the coastline is rough and there were also many powerful storms that hit, making the entire coast a gigantic marine cemetery.

There is a selection of the thousands of valuable artifacts that have recovered from the sea. The collection includes jewels, coins, ingots, cannons and more. Included in the collection are the remains of two artillery pieces from Ovando’s fleet.

A very interesting display has a selection of jewelry, coins, ceramics and weights found in a Spanish shipwreck in Punta Cana, also from the 16th century. There is a spectacular display of objects from the galleon Nuestra Señora de la Limpia y Pura Concepción (crashed into the Dominican reefs on October 30, 1641) made up of jewelry, precious stones and Ming ceramics.

A digital map shows the fortifications of the Spanish during the early exploration of the Americas.

The Museum of Royal Shipyards invites visitors to interact with history. There are many interactive displays and learning tools. One of the most interesting parts of the museum is a full-scale replica of two batteries of an actual colonial ship. You can experience the sounds and scents of the sea.

All the items listed above and so many wonderful items are included in the collection that is part of the Laboratory of Undersea Cultural Patrimony at the new Museo de las Reales Atarazanas. The museum is financed with a loan from the Inter-American Development Bank and is the work of the architects Wilfredo Feliz and Alexy Cordones. The newly remodeled Museo de las Reales Atarazanas (MAR) was inaugurated on December 12, 2019.

Location: Calle Atarazanas and Calle Colón on the corner of Vicente Celestino Duarte in front of the Puerta Atarazana. The street can be accessed by going down the staircase from Plaza España at the Alcázar Colón. Zona Colonial, Santo Domingo, Dominican Republic.

Hours:
Tuesday to Saturday from 9 am to 5 pm.