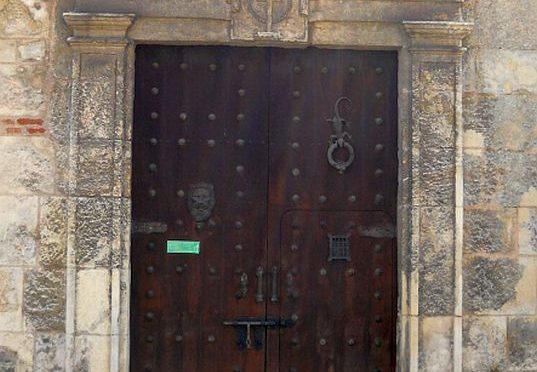 Casa del Tapao is a large colonial two-story stone home that is beautifully restored and conserved. It is shrouded in many legends including a story about the inhabitant who kept his face covered.

Casa del Tapao is a large two-story stone home that is beautifully restored and conserved. The residence was built in the 14th century between 1554 and 1556. Duque de Rivera, with help from the Cathedral of Santo Domingo, helped build this home. The shield of the Duque is located atop the stone portal of the main entrance.

Casa del Tapao now is part of La Quinta Billini located a little further down Calle Padre Billini. The building is used for cultural events, art exhibitions and can be rented for special activities and parties.

Casa del Tapao is shrouded in legend and mystery. No one is sure exactly what went on behind the walls of this home. We can only speculate.

It is said that the condemned prisoners arriving here from Mexico stayed in this house and always left covering their faces so they could not be identified.

Another legend of the Casa del Tapao says that the gentleman living here was deformed and had a disfigured face, maybe from some disease such as leprosy. He only left the house at night and always had his face covered. Some legends state that this man was the twin brother of the King of Spain and he was hidden here so as not to disgrace the family.

The story says that the lone resident was a strange man who always kept his face covered so he could not be recognized. The people did not know much about this mysterious man so they called him “El Hombre del Tapado”

All these legends have one thing in common; someone stayed here who was secretive and stayed covered. None know for sure now why the inhabitants of this house always seemed to remain undercover. This is another mystery of the history of the Colony of Santo Domingo that will never be answered.