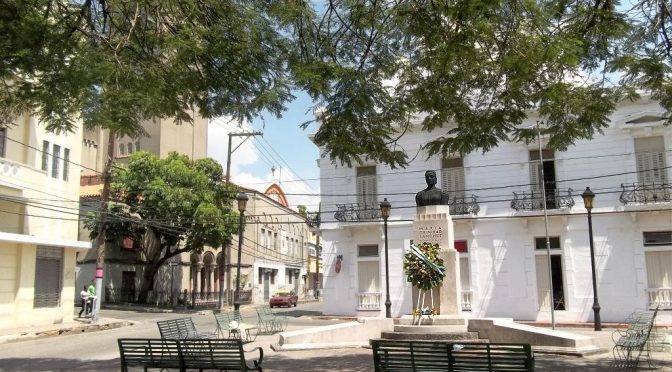 Parque – Plaza Maria Trinidad Sánchez And The History Of María

This small triangle-shaped park is dedicated to the great woman patriot Maria Trinidad Sanchez. She is the Aunt of one of the Fathers of the Nation, Francisco del Rosario Sanchez. She represents the best of female leadership at the time. In this tree filled park is a bust of this brave Dominican woman with benches surrounding.

Maria was a Dominican activist who actively participated in the independence of the Dominican Republic against the Annexation to Spain. She collaborated with Los Trinitarios, who shared the idea of a free and independent republic. On February 27, 1844, at the peak of the battle, she carried gunpowder to make the gun cartridges used that night underneath her skirt.

Maria Sanchéz was very involved in the conspiracy of 1845 against General Pedro Santana who later became president. Maria and the others involved were caught and imprisoned. She was put on trial for conspiracy. When questioned about the location of her nephew, Francisco Sanchez, she refused to tell where he and the other members of the Trinitarios were hiding.

This heroic deed, among others, led to her execution. She was lead out of her prison in Fortaleza Ozama to the Cemetery where she was to be shot. As she passed by the Puerta del Conde (Parque Independencia) she exclaimed: “Dios mío, cúmplase en mí tu voluntad y sálvese la República”/ “My God, let your will be done in me and save the Republic.”

Maria was one of the first victims of political crimes in the history of the Republic. She was executed, along with her nephew Andrés Sánchez, because of her actions against the annexation of the country to Spain.

Maria Trinidad Sanchez was shot on February 27, 1845 on the first anniversary of the founding of the Republic. She was executed because of her dedication and love for the country and for her desire for the sovereignty of the Dominican Republic.

Corners of Luperon, Calle Mercedes and 19 de Marzo. From Calle el Conde turn up (north – away from the sea) on 19 de Marzo, 2 blocks on the left.