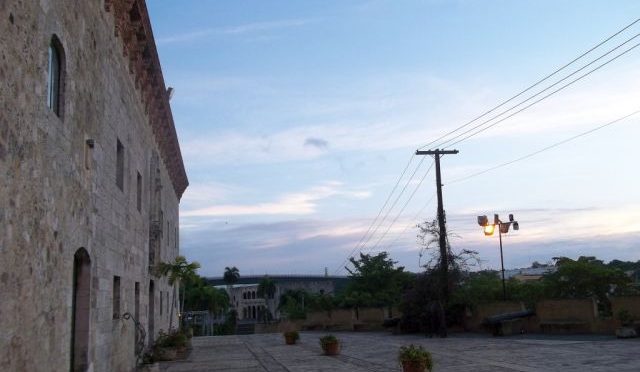 Casa Reales – The Building and the Museum

The fusion of three different colonial houses come together to form the Casa Reales. Originally built in 1508 it is now the home of a very informative museum explaining the rich history of this island and the country of Dominican Republic. It also houses a collection of weapons once owned by the Dictator Rafael Leónidas Trujillo Molina.

The original house, built in 1508, was a property of the treasurer Cristóbal de Santa Clara. A few years later it was confiscated for debts and became the property of the of the crown.

The Casa de Contratación, an adjacent property, was built in the year 1504 and became the residence of the Governor or Captain General of the island.

the space between these two buildings was filled and the 3 buildings became one, a palace dedicated to La Real Audiencia de Santo Domingo / The Royal Audience of Santo Domingo.

This building was home to the government palace until the Trujillo Era when the new Government Palace was built. Then President Joaquín Balaguer restored the building and converted the buildings into a Historical Museum.

The arched gothic style windows on the second floor was where the Royal Court was held. It gave a perfect view of the Sun Dial in the plaza. This is how the court knew the correct time to write on the official documents.

Casa Reales Museo was created by President Balaguer and opened to the public on October 18, 1973. The museum is dedicated to everything related to the periods of discovery, conquest and colonization of the island and its relationship with the rest of the American continent.

This powerful building has many beautiful architectural styles. The huge ground floor windows keep the buildings fresh by letting the cool breezes flow through its luxurious stone and coral walls.

There is a replica of a colonial courtroom and many exhibits in the museum including the coat of arms of Spain.

Underneath the stone staircase is a large globe of the world with a horse on his hind lags ready to leap. Here is written in Latin: Non sufficit orbis (The world is not large enough).

The beautiful interior courtyards are perfect for taking a breath of fresh air. The statue of Fray Alonso de Zuazohold looms in thge center of one of the pation and also you just might spot a peacock or two strutting around the large beautiful interior patio.

: Calle las Damas and the beginning of Las Mercedes The Plaza del Reloj Sol is in front and it is connected to Plaza España. Phone: 809-682-4202.