Calle Hostos is one of the most beautiful and unique in the Colonial Zone. This very old and historical street runs from North to South through the heart of the Colonial City.

The street originally was named Calle del Hospital, named so because of the Hospital San Nicolás de Bari is located on this calle antiguo. Hostos was also called Calle Militar.

Calle Militar changed its name again in 1904. The name was changed to what it is today, Calle Hostos. It is named after the Dominican national hero and educator Eugenio María de Hostos (1839-1903).

The most beautiful and most photographed part of this historic street is going up the steep hill. There are stairs on either side of the steep cobblestone street. Here you can see some of the original old wooden houses, protected by UNESCO, lining the incline.

Calle Hostos has been the location for many different movie shoots the most famous being The Godfather III. 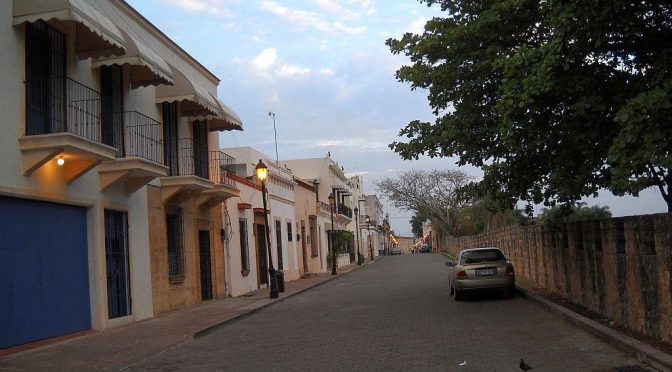 Nicolás de Ovando, Governor of Hispaniola, left a huge mark on this Colonial City. His strength, his cruelty and the developments he made to the original colony are both good and bad.

Frey Nicolás Ovando y Cáceres (1451-1511) was born into a rich family in Spain. In 1502 he becomes the third Governor and Captain-General of the Indies. There were too many complaints about then Governor Francisco de Bobadilla. Ovando replaced Bobadilla and served as the Governor of Hispaniola between 1502 and 1509.

When Ovando arrived to take over his appointed post as governor of Santo Domingo he brought with him over 30,000 colonists to populate the island.

Ovando was a conquistador. In a very short time he exploited and enslaved the islands indigenous peoples. He exterminating entire towns (Slaughter of Jaragua and Higüey), conquering and enslaving the native people. He forced the natives to work in homes and to plant crops, including the introduction of sugar cane. He used them to mine for gold. They were used as slaves on the ships that returned to Spain.

Ovandos type of governing was the model of the great conquering of Spain in the new world. He commissioned expeditions of discovery and conquest throughout the Caribbean, all from his offices here in Hispaniola. He founded 17 villages and cities on the island. He instituted the first town halls.

Under the rule of Ovando the Spanish colony of Santo Domingo became very rich. The wealth cost the lives of almost all of the original native inhabitants of the island.

One of the first terrible acts Ovando committed when he became Governor was to order the arrest of Anacaona. Anacaona was a Taíno queen. Ovando had his army search for and find her. While searching for her the army massacred many of the indigenous peoples. Anacaona was executed by hanging. After her death many of the natives fled their island home.

A statue of Anacona can be seen in Parque Colón climbing up the side of the Columbus statue.

King Ferdinand V made the brutal Ovando return to Spain in 1509. He was ordered to return because of his brutal treatment of the native people. Diego Columbus was then appointed as Ovando’s successor as governor.

Ovando returned to Spain a rich man. He was permitted to keep all the property and riches he acquired while exploiting the island and its native people.

The Residencia de Ovando is a stunning mansion built especially for the Governor Nicolás de Ovando, the first Governor in the Americas. As you enter the Colonial City from the east, this monster of a home looms atop the stone wall overlooking Rio Ozama.

The magnificently renovated colonial home of Governor Nicolás de Ovando y Cáceres resembles a small castle. It sits behind the walls of Fuerte Invincible. They built it about 1502 for the Governor. It is also known as the Casa de la Virreina and the Casa de los Cañones.

This Elizabethan Gothic style home, now a luxury hotel Hodelpa Nicolás de Ovando, has been beautifully restored. Perching high above Rio Ozama, it takes up an entire street block sitting next to the Casa de la Familia Dávila. The casa has beautifully carved stone windows. The elegant interior exhibits a stunning mahogany wood ceiling and a spacious exterior courtyard (where the hotel pool is located) that faces the Ozama River. There are also entrances to some of the underground tunnels, wells and culverts that wind beneath the colonial city (you cannot enter but you can look down into these tunnels).

The first constitutional president of the Dominican Republic, Pedro Santana, lived in the home for a short time.

There is a huge bronze statue in the center of Plaza España honoring the 3rd Governor of Santo Domingo. In the stone pedestal on which the statue stands are the inscriptions “Comendador Mayor de la Orden de Alcántara” / “Supreme Commander of the Order of Alcantara” and “Fundador de la Nueva Ciudad de Santo Domingo” / “Founder of the New City of Santo Domingo”.

*The appointment of Fray Nicolas de Ovando as governor of Santo Domingo was instrumental in the construction of the historical and tourist center today known as Colonial Zone. He gave it the charm and charisma it still has to this day.

*Villa Nueva Isabela, now called Villa Duarte, was the original settlement founded by Bartolomé Colón It is located on the other side of the Rio Ozama. The settlement was hit by a major hurricane in 1502 and almost destroyed. Fray Nicolás de Ovando was responsible for moving the settlement to the west bank of the Ozama River where Zona Colonial is now located.

*The Franciscan Monks arrived in 1502 under the command of Nicolas of Ovando. They started the construction of the first monastery in the new world in 1508. El Monasterio de San Francisco now stands in ruins.