Located in a quiet part of Ciudad Colonial is the nice little Plaza Parque Pellerano Castro. It is also known by the locals as Parque Rosado / Pink Park and Parquecito De Los Poetas / Poets Park. Whatever you call it, this out of the way park is a nice place to rest relax.

The park had a make-over in the 1990s and was remodeled by the architect Manuel S. Gautier. Parque Rosdao /Pink Park, named such because it is painted a soft pink color, is a perfect place to rest in peace and quiet. There are many benches located under beautiful shade trees with hanging creepers giving this park a unique feeling. The other edges of the park have banana, avocado and mango trees. You can also see some chickens running around from time to time. If you’re lucky you may get to meet some of the local dogs who make this park their home.

This quiet park is named after the poet Arturo Bautista Pellerano Castro, who was also known by the pseudonym of Byron, born in Curazao March 13, 1865 and died in Santo Domingo May 5, 1916. There once was a bust of the poet located in the park. There is a stand where the poets bust was once located with a plaque that commemorates the poet and has a few of his quotes.

The newest addition to the park is a bust of Julia de Burgos, created by sculpture René Alejandro Guzmán, and inaugurated February 6, 2014.

Burgos, a playwright, poet, journalist and activist, is considered to be the most outstanding Puerto Rican poet of the twentieth century. She hung in the circles of intellectuals like Juan Bosch and Dominican politician Juan Isidro Jiménez Grullón, who became an inspiration of many of her best poems. She was a fighter against political injustice. In 1944 she wrote two poems for the centenary of the country: “A la Ciudad Primada de Santo Domingo” and “Hymn to the Blood of Trujillo”.

More of the story of Julia de Burgos.

Location: Walking from the eastern end of the Conde turn right towards the sea (north) on Calle Isabel la Católica or Calle Las Damas. Walk to the end of either of these streets and you will run into the park. Located at the intersections of Calles José Gabriel García, Arzobispo Meriño, Isabel La Católica in the Colonial Zone. 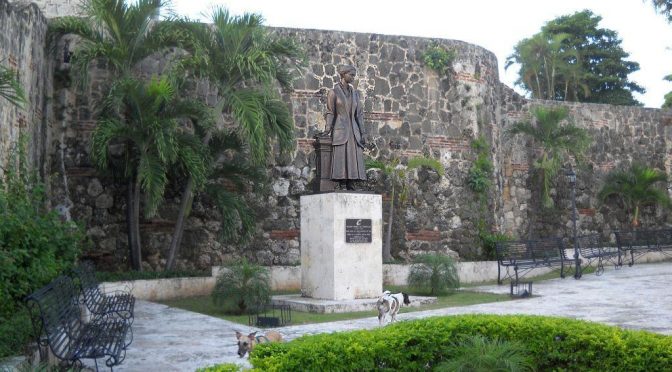 The Plaza de la Poesía was build to honor the Dominican poet and the founder of women’s higher education Salomé Ureña de Henríquez (October 21, 1850 – March 6, 1897). This small cozy plaza was inaugurated during the III Festival de Poesía de Santo Domingo on October 2011 to mark the importance of poetry and reading in the country.

This small intimate plaza is the perfect place to get away from it all. A quiet place to sit, think or read. In years gone by this area was full of chaos and commotion. The gate next to the park is the Puerta Atarazana which was the entrance to the shipyards and warehouse of the Atarazanas.

The Puerta Atarazana on Calle Colon behind the Alcazar del Colon and Plaza España.